Zoe LaPorte is a junior English and communications major at Misericordia University in Dallas, Pennsylvania. She serves as the web editor for Misericordia’s award-winning student newspaper, The Highlander, where her duties are to update the online version of the paper with the print content and to update The Highlander’s social media pages. She works with a team of editors to report on current events and to write other stories. She also covers sports and other campus events as a photographer.

As a work-study student for the university’s information technology department, she helps faculty and staff with technological issues that arise during classes or in the office. She is also a member of the Misericordia Players, where she has directed and acted in productions. Outside of school, she volunteers for the religious education program at St. John the Evangelist Church in Pittston, Pennsylvania. She enjoys photography, video editing and spending time with her family and friends. 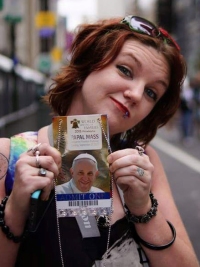 Megan Milligan is a journalism student in the Klein School of Media and Communication at Temple University. Growing up in suburban Philadelphia in Delaware County Pennsylvania, she was raised by her grandparents until age 16, when they moved to North Carolina. Megan wanted to finish high school in Pennsylvania, so she stayed behind with her mom and stepdad to attend Cardinal O’Hara High School. After graduation, she attended Widener University for a year, studying psychology. Not happy with her major, she dropped out and took classes at a community college while she worked and figured out what career path to follow.

At age 24, she moved to North Carolina to live with her grandparents. Later that year, after Edward Snowden’s revelations about the NSA, she decided she wanted to be a journalist. She moved back to Pennsylvania, earned her associate degree at Delaware County Community College, then enrolled at Temple. Her goal is to write for broadcast news or to be a conflict photographer.

Anh Nguyen, a journalism student at Temple University, is a bilingual, multi-media journalist from Philadelphia. She was born and raised in Ho Chi Minh City, Vietnam, where she developed a passion for storytelling and creative writing. She has produced stories for WHYY (the National Public Radio affiliate in Philadelphia), PhiladelphiaNeighorhoods.com and the Temple News, the university newspaper. She is currently an investigative intern at the Philadelphia Inquirer, where she is working on stories about the mental health liability on college campuses, animal welfare and the Vietnamese community in the city.

Her focus on writing that matters has led Anh to intern at the Republican National Convention, to conduct research on the impact of President Trump’s tweets on fact-checking and to take a deep dive into marginalized communities in Appalachia in Kentucky and on the Rosebud Reservation in South Dakota. She is the co-founder of the Temple Debate Society and an active member of the university’s Honors Program. She will graduate with her bachelor’s degree in December.

Ashley Stalnecker has completed her freshman year at Ithaca College, where she is majoring in journalism and part of the honors program, which serves as her minor. She is the crime beat reporter for the Ithacan, which she describes as “one of the best college newspapers in the country,” and writes online for the Odyssey, which allows her to pursue more creative aspects of her writing. In her second semester, she was elected vice president of communications for Ithaca’s chapter of the Society of Professional Journalists. She has also served as secretary for the running club and will become the club’s vice president in the fall.

Ashley says that she has aspired to be a writer for as long as she can remember. Growing up in the small town of Lebanon, Pennsylvania, she says there wasn’t a lot to do. “I relied on books to carry me to faraway places that were far more interesting, and I hoped that one day I would have that ability to captivate readers in the way those books captivated me,” she says. By middle school, she had decided to become a journalist and pursued that goal by joining her high school newspaper, where she served as the entertainment editor, then as editor-in-chief.

Coverage of the Pennsylvania Press Conference and Keystone Awards in Gettysburg