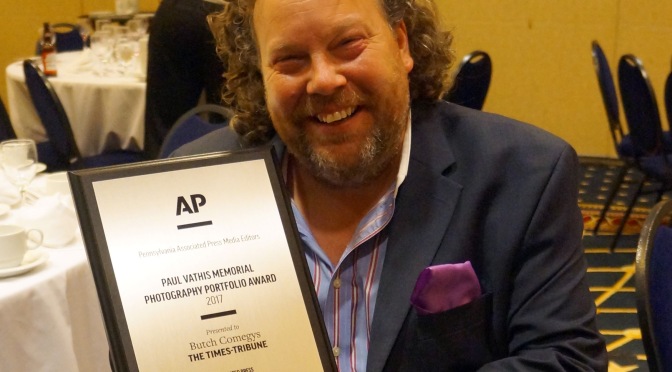 Comegys received the award, given in honor of the Pulitzer Prize winning photojournalist, for his work from last year.

“I’m shocked,” Comegys said. “I definitely did not expect this.”

Comegys called his mother from the 2018 Pennsylvania Press Conference to tell her the good news. His family, particularly his father, inspired much of his career.

Fred Comegys was a photojournalist for 50 years and was by his son’s side as he received the award — just as he was the first time, in 2016.

Comegys said his father taught him everything he knew about photography. So much that, at the age of 17, he knew more than his high school photography teacher.

“He even told me, he said, ‘I didn’t teach you anything, you did it on your own. You did it yourself,’” Comegys said. “That feels good. It feels humbling.”

Comegys said that whenever he’s on assignment, he thinks about how his father would shoot the photograph. He tries to emulate his father’s style in his photography.

Comegys started his career at the Wilmington News-Journal in Delaware, alongside his father, and has been at the Times-Tribune for more than 20 years.

He said Scranton has been his favorite place to work. He said it feels good to have people that trust him and recognize his work.

“I’ve been there the longest and I love the people there,” Comegys said. “I have a great job.”

Coverage of the Pennsylvania Press Conference and Keystone Awards in Gettysburg